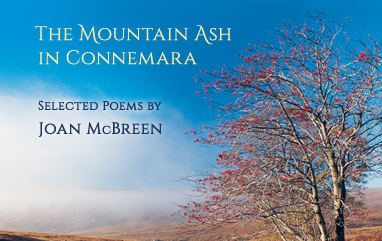 Joan McBreen is from Sligo and now divides her time between Tuam and Renvyle, Connemara, Co. Galway. She has published five collections of poetry, the most recent being Map and Atlas. Her two anthologies are The White Page / An Bhileog Bhán - Twentieth Century Irish Women Poets (Salmon Poetry, 2001) and The Watchful Heart - A New Generation of Irish Poets Poems and Essays (Salmon Poetry, 2001).

In 2014 she produced a CD The Mountain Ash in Connemara - Poems by Joan McBreen with original music and traditional airs composed by Glen Austin and performed by the RTÉ Contempo String Quartet. In 2015 she brought out a broadside The Mountain Ash, a collaboration between the poet, visual graphic artist, Margaret Irwin West and printmaker Mary Plunkett. From Artisan House Publications, Letterfrack, Co. Galway it was launched at Clifden Arts Festival 2015. She is working on a new collection of poetry, The Stone Jug. Together with reading and lecture tours of the US, McBreen is closely associated with most of the major literary festivals in Ireland.

Her anthology The White Page / An Bhileog Bhán - Twentieth-Century Irish Women Poets was published by Salmon Poetry in 2001 and is in its third reprint. Her poetry is published widely in Ireland and abroad and has been broadcast, anthologised and translated into many languages. Her CD The Long Light on the Land - Selected Poems, read to a background of traditional Irish airs and classical music, was produced by Ernest Lyons Productions, Castlebar, County Mayo in 2004. She has given readings and talks in many universities in the USA including Emory, Villanova, De Paul (Chicago), Cleveland, Lenoir Rhynne, N.C. and the University of Missouri-St. Louis. In 2010 she undertook a six week reading tour of Nebraska, Iowa and Alabama and in 2012 she read at the University of St. Thomas, St. Paul,

Joan McBreen's publications also include her anthology The Watchful Heart - A New Generation of Irish Poets - Poems and Essays (Salmon Poetry, 2009). She has been involved for many years with Irish literary festivals including the Yeats International Summer School, Sligo, Clifden Arts Festival, Listowel Writers' Week and the Cúirt International Festival of Literature, Galway. She was a serving member of the board of Poetry Ireland. Glen Austin is an award winning classical music composer and music producer. He writes and produces music in a variety of genres for various productions including radio, DVD and theatre.

Glen is currently an assistant lecturer in music composition and a PhD student at DIT Conservatory of Music and Drama. He is the recipient of various awards for his compositions. Last year he won the IMRO String Orchestra Composition Competition for his piece Through the Void for string orchestra.

In 2012 his song Night's Final Breath for piano and soprano was awarded The Walter Beckett Cup for Original Song. His music has been performed by many of Ireland's leading musicians and ensembles at venues, national and international. ConTempo String Quartet was formed in 1995 in Bucharest, Romania. Recognised as one of the world's top string quartets, ConTempo has won a record of 14 international prizes and performed more that 1,000 concerts all over the world in venues including Carnegie Hall NY, Wigmore Hall, St Martin-in-the-Fields and St John's Smith Square in London, The Philharmonie in Berlin, Max-Joseph-Saal in Munich, Théâtre Châtelet in Paris, The Opera House in Tel Aviv, Musée des Beaux Arts in Brussels, Geidai Hall in Tokyo, The Waterfront Hall in Belfast, Athenaeum Hall in Bucharest, National Concert Hall in Dublin and The King's Lynn Festival (where they performed Elgar's Introduction and Allegro for string quartet and orchestra with the Royal Philharmonic Orchestra).

ConTempo recorded the Adagio from Beethoven's Opus 131 for Steven Spielberg and Tom Hanks' television drama Band of Brothers. They composed and performed the music for the Danish silent film The Abyss. The quartet also took part in the documentary Deutschland, Deutschland, an ORF & Sat3 production about Haydn's and Siegmund Nissel's lives.

In 1999 they took up a Fellowship at the Royal Academy of Music where they taught chamber music classes and worked with some of the most famous quartets in the world: Amadeus, Alban Berg, Hagen, Tokyo and Emerson. Since 2003 they have been Quartet in Residence on the West Coast of Ireland embarking on a unique project, an annual ConTempo Summer Festival, with guest artists such as Emma Johnson, Martin Lovett, Bruno Giuranna, Hugh Tinney, John Feeley and Martin O'Connor.

Speaking today Aodán Ó Dubhghaill, Interim Executive Director of RTÉ Orchestras, Quartet & Choirs, welcomed the announcement: "In 2011 RTÉ reaffirmed its commitment to chamber music, as well as its commitment to the provision of chamber music services from Cork and Munster. At that time we signalled our intention to tender for services. That tender is now complete, following a lengthy process that considered a range of requirements. I would like to pay tribute to the Vanbrugh Quartet, who have played as the RTÉ Vanbrugh Quartet for 27 years. Rightly acclaimed, they defined the standard for chamber music in Ireland and we wish them well in what will undoubtedly be their continued success."

Mr Ó Dubhghaill welcomed the arrival of the RTÉ Contempo Quartet: "ØWith this appointment we open another exciting chapter for chamber music in Ireland. With an exceptional background in performance and education, the RTÉ Contempo Quartet will maintain the chamber music and string quartet presence in Cork while also opening up a new and welcome presence in for RTÉ's musical presence in Galway. I look forward to announcing their 2014 programme in the new year."

The appointment sees RTÉ maintain its commitment to chamber music and the string quartet medium, in Cork and beyond. The RTÉ Contempo Quartet will seek to develop opportunities through a range of activities including concerts, broadcasts, recordings, educational and community workshops, multi-media, digital and social media initiatives at local and national levels.

ConTempo Quartet was founded in 1995 at the "George Enescu" Music University in Bucharest, Romania. Since then ConTempo has won a record 14 international awards and performed at more than 1200 concerts in 46 countries. This includes venues such as Carnagie Hall, NY, Gedai Hall, Tokyo and Theatre Chatelet, Paris.
Between 1999 & 2002, ConTempo was appointed Quartet-in-Residence at the Royal Academy of Music in London where they coached graduates and studied with members of renowned quartets Amadeus, Alban Berg, Hagen, Emerson & Tokyo. In 2003 ConTempo became "Galway Ensemble-in-Residence" under the umbrella of Galway Music Residency. The project is sponsored by the National University of Ireland Galway, the Arts Council, Galway City and County Councils & Bank of Ireland. ConTempo won the European audtion for the new Quartet-in-Residence of Ireland's national broadcaster, Raidió Teilifís Éireann (RTÉ), in 2014.
Throughout their career they have had the great honor of performing for Pope John Paul II, Nelson Mandela, Prince Charles, Hollywood stars & Nobel Prize winners.