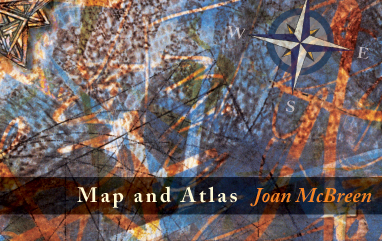 "Joan McBreen's Map and Atlas comes to us from a confluence of two great rivers; two streams of thought, the one private, the other public. Her map-work has been achieved through observation and memory, through a restlessness in nature and clear-headed observations made through windows flung open.

Here is a poet widely travelled, from Omey to Wellington, but with the lens constantly looking inward: 'The senses are not visionary/ and we ask neither more nor less/ of this earth in whose measure/ we are fixed.'

Map and Atlas is a work of great emotional clarity and honesty, a poetry at once intimate and universal, from a poet who goes from strength to strength with every year that passes."
- Thomas McCarthy

The poems in Map and Atlas are reflective of Joan McBreen's 'lived experience' in the current and recent past dealing with illness, vulnerability and frailty, all highlighting the temporariness of life itself. Yet amidst this there is resilience and determination.

Joan has edited two anthologies and has engaged in a number of artistic collaborative projects including the Mountain Ash Broadside with printmaker Margaret Irwin and letterpress printer, Mary Plunkett ( Artisan House Connemara, 2015).

Joan McBreen,  from Sligo, now divides her time between Tuam and Renvyle, Co. Galway.  She is a serving member of the board of Poetry Ireland.